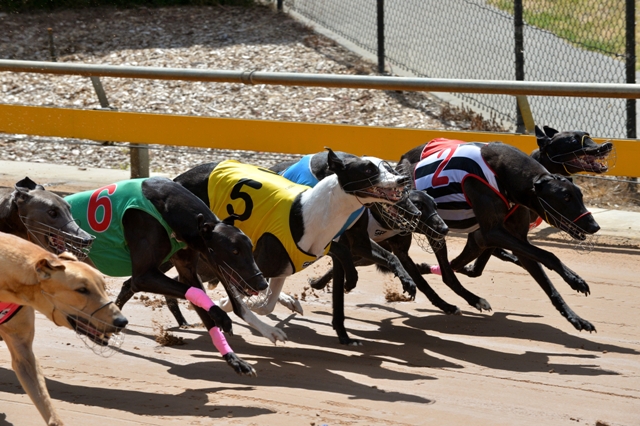 
Feature Greyhound Racing this weekend makes its way to Healesville on Sunday where we see eight wonderful heats of the All 4 Paws & Claws Healesville Cup.

Race 4 is Heat 1 and like all the heats it is jam packed full of quality. Kayda Shae for Kelly Bravo will start favourite no doubt, but the draw hasn’t been kind to him here. He also isn’t suited to the short trip. Those who can upset him include Dozer Tron, who is very fast, and Breathing Fire, who tuned up for this with a placing here last Sunday. My selections 4-6-3-2
.

On to Heat 2 and we see the star Azza Azza Azza bounce from Box 1. He has won his past four brilliantly and, provided he begins well, he should be too good. Main dangers include Shameless Bandit, Eddie Yap and George Sanette. My selections 1-7-8-3
.

Heat 3 is probably the most open of the heats with no real stand out, hence while I will be looking for value. Pud will start favourite and deservedly so, only missing a place once in 11 starts at this course and trip. He is well drawn and is the one they have to beat. Here though I’m keen on Monkey Gas each way. First up in Victoria, he possesses good speed early and is perfectly drawn. He will be strong late and I think he can win at good odds. Other chances in a tough heat include Blue Giant, Danny Darko and Fleetwood Zac. My tips 1-2-8-7
.

Over to Heat 4 and and I think it’s a race in two. Danyo’s Slappy and Kid Audacious who have been in red hot form recently. Danyo’s Slappy won in flying fashion at Sale last start whilst Kid Audacious is shooting for six wins on the bounce. Other small chances to Quint Bale, who is flying at present, the veteran Mepunga Armagh and Senor Grumpy. My top 4 3-2-5-4
.

Heat 5 is Race 7 on the program and it’s a genuine race in three. Bowl Em out in box 1, Big Ticket in 2 and Ronray Spirit in 7 are the big players here. Big Ticket has been ultra-impressive at his past 2, Bowl Em Out has the favourable draw, whilst Ronray Spirit is the country cups king. It should be a cracker race. My tips 2-1-7-5
.

Heat 6 is next and I’m especially keen on the Jason Thompson trained Hail Storming. This guy hasn’t missed a place in 12 starts for Jason and he looks very hard to beat. He possesses blinding speed, and has the strength to go with it. Main danger clearly is Shared Equity, who was the recent winner of the Straight Track Championship at Healesville. Other chances to La Grand Logie, Gaelic Peter who needs luck early and Unquestionably, who loves this track. Selections 2-3-6-5
.

Race 7 is arguably the pick of the heats. There are genuinely four or five winning chances. Favourite will be Billo’s Pick for Kel Greenough. He is well drawn and very fast. Other strong winning chances are Track specialist Soldier Spy, the brilliant Ride the Rails and Ultima Bale, but the worry is the short trip for the latter two. My tips 2-6-1-7
.

It may well be a case of saving the best for last on Sunday, as in the final heat we see the freakishly talented Allkel To Excel engaged. This Kel Greenough youngster has won 10 of 11 and he looks something special. Drawn perfectly here in Box 8 he will have time to wind up and he should win. Main danger is Light Em Up who was awesome winning all the way here last week. They are the clear top two. Small hopes to White Spyro and No Donuts. Selections 8-2-3-6
.
.
Healesville Formguide: Click Here
.


Watch: Allkel To Excel (8) hasn’t raced since this sensational run at Horsham in June, but Matt Jackson believes that won’t stop him stretching his record to 11 wins from 12 starts.
< Previous
Next >