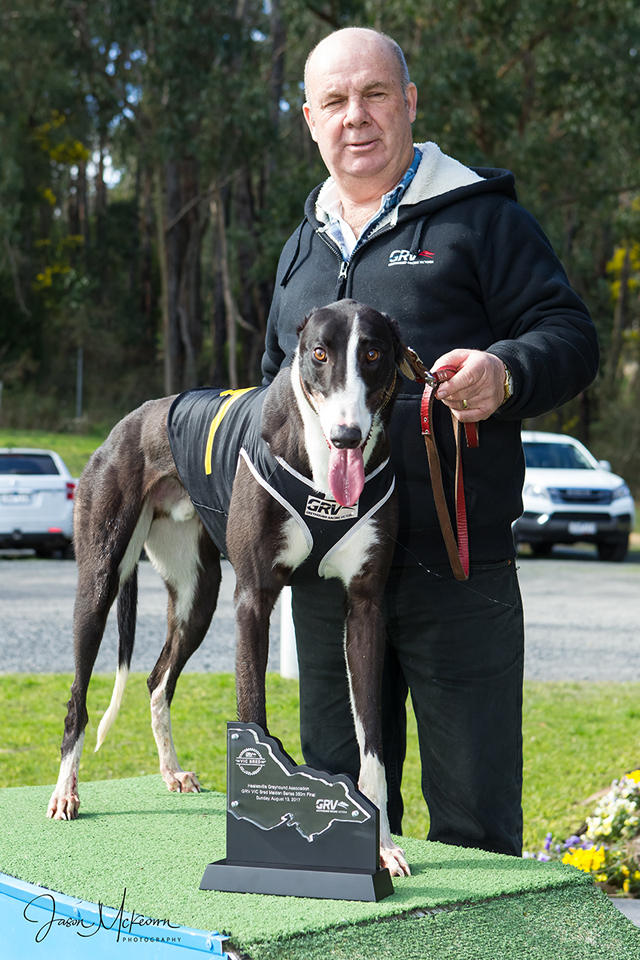 
To win a Melbourne Cup is an amazing achievement in the greyhound racing community, but Devon Meadows trainer Garry Selkrig (pictured with his young star Peter Galo, photo credits Jason Mckeown Photography) said to feel complete as a trainer winning a Healesville Cup is higher on his list.

“I would rather win a Healesville Cup then a Melbourne Cup,” Selkrig said.

While the Melbourne Cup holds a staggering $420,000 price tag for first prize along with a Group One status, the Group Three Healesville Cup holds so much more than money for Selkrig who has had his fair share of success in the past.

“Racing at Healesville isn’t just about great racing – it’s the friendly and relaxed atmosphere, it’s the picturesque drive to and from the track and it’s the home made sausage rolls we get for the drive.”

Selkrig concedes that he wouldn’t turn down the money for the big group one races, because he knows how crazy it sounds but the Group Three Healesville Cup is just one of those races he has always admired.

Selkrig has four chances for Healesville Cup contention but his youngester Peter Galo has straight track fans jumping for joy.

Peter Galo is a winner of four races from just five starts – all victories at Healesville including a $7,500 VIC Bred Maiden final.

“He is an exceptional dog,”
“Peter Galo is drawn well in box eight and I am hoping he gets an easy run from the outside of the track.”

With some scary competition in the fourth All 4 Paws and Claws Healesville Cup heat on Sunday, Selkreg believes that drawing box eight will suit Peter Galo against his biggest test to date.

Selkrig’s other contenders includes Paua To Avoid who is jumping from box two in the first heat.

Splash Of Blue, who has a special 19.00sec PB at the Track and distance who is in heat two and jumping from box three.

“Splash Of Blue is a bit of a surprise package because he can run time – he just needs a bit of luck.”

The last of Selkrig’s chances is Unbackable, who is jumping from box seven in the fifth heat.

All of the All 4 Paws and Claws Healesville Cup heat action will kick off at 11.36am, with the first race on the card jumping at 11.01am.